Check timetable in the “Info” box 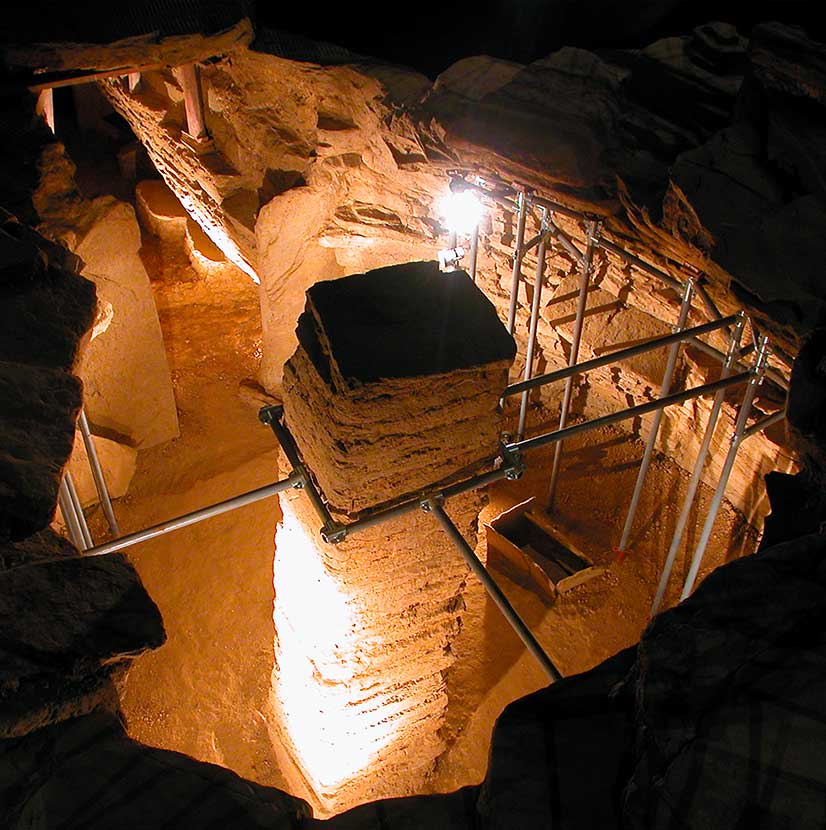 The Montefortini tumulus is the main witness to the extraordinay knowledge of the cultural development of the Carmignano territory during the Etruscan times and is one of the most important monument of the Tuscany. 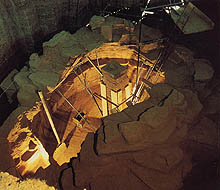 The most ancient one, placed in the center, is a tholos shaped tomb (circular room) with vestibule

The oldest, located in the center, is a tholos shaped tomb (circular room) with vestibule and circular cell with a diameter of more than seven meters, with a shelf behind the closing of the upper dome. The tholos – featuring a terrace-altar devoted to ceremonial funerals, ortogonal to the drum and bounded by a pseudo-tiers – returned to light a rich grave set, which has been subject to a complex restoration, not yet concluded, that includes a rare turquoise glass bowl, a series of plates on top of a foot “bucchero” such as a vast number of carved or engraved ivory objects, high and low relief all round: plates, small figures of men and women, but also animals, floral elements, combs, which shows the relationships these great Etruscan families had on an international scale, either political and economic. 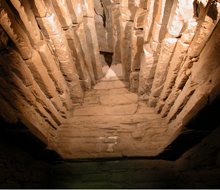 Inside of the Tomb quadrangular Chamber

Some years after the construction of the tholos, as a result of a collapse that could be due to a strong earthquake, a rectangular chamber tomb was built, with an open monumental entrance hall at the bottom of which a large trilithic portal allows access to the quadrangular vestibule and then to the cell, with a shelf in correspondence of the upper part of the walls and roof slabs projecting to a fake vault.

The findings relevant to this second set, very fragmentary because of the repeated pillaging over the centuries, however, attest to the wealth of the family and its potential for even international relations.

The tumulus can also be visited in case of rain

Free guided tours every 1st Saturday of the month

Meeting at 9.30 at the Tumulus of Montefortini in Comeana.
The visit will continue to the Necropolis of Prato Rosello in Artimino (transfer by own car) if the weather conditions allow it.
Reservation is not required.

By the Carmignano Archaeological Group

N.B. Visits do no take place on 2 June and in August.

This monumental burial is an artificial hill that is approxiamately 12 meters tall (3-5 meters less that it was originally) around which have been place two chamber tombs:  the first one to be built- excavated in the eighties-  has a round layout (tholos); the other, which came to light in 1966 has a rectangular layout.Il Tumulo è alto attualmente circa 12 metri, probabilmente 3-5 metri meno che nell’antichità.

The tholos tomb has a circular chamber with a diameter of over seven meters, the walls are made of rows of sandstone blocks topped by a bracket where the blocks of the ceiling gradually begin to close until they reach a height of approximately three meters.

A rectangular vestibule provided access, its enormous monolithic ceiling still prohibits encrance to the hallway (dromos) which is open to the sky.

The rich find of burial objects (640 – 630 a.C.), which have undergone a long restoration includes, among other important pieces, a splendid turquiose glass vase and a series of extraordinary ivory objects for the most part decorated with high and bas-relief but a few have incisions and others have been sculpted with drilling techniques:precious scenes with male and female figures, patrons, warriors and carytids, animals, both real and imaginary, floral motifs and combs. All of these objects testify to the solidity of the local archistocracy which was capable of combining political and economic relation on an international level, both directly and indirectly through mediation with sea going merchants from Greece or Phoenicia.

The access to this burial consists of an uncovered monumental hallway (dromos) longer than 13 meters and 2.5-2.8 meters wide with a maximum height of approximately £.5 meters. A large trilithic portal opens o the entrance wall- which has been vandalized by grave robbers in ancient times- it was originally sealed with a heavy stone block (which has been thrown on the left wall of the dromos)- that leads to the square vestibule before the rectangular chamber which is also characterized by the prescence of a bracket that runs along the top of the walls. Both of these rooms are covered with inclining blocks (a false dome) whose extremities are inserted in the entrance wall and in the back. This is a construction that insures great stability because the baaricenter of each block falls directly onto the block underneath and the final weight of the ceiling is distributed to the lateral walls; the stability is further assured by the presence of clay-like soil, that weighs down on the blocks creating an important counterweight which effects the entire structure by giving it cohesion and elasticity.

Even though fragmentary, the objects found in this tomb, which are on display in the Archaeological Museum in Artimino, made of rich materials provide information on the extraordianry wealth of the family: just to name a few the balm container of Egyptian production, decorative elements, sculpted ivory pyrexs gold plaques, silver coins, elements and bronze vases, bucchero vases and more than two burial urns which recall the style popular in Volterra and now known also in the necropolis of Prato Rosello.
Both tombs equipments are displayed inside the Archeological museum of Artimino.